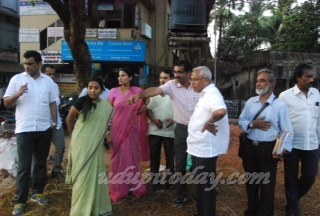 Mangaluru, 22 March 2015: As the concreting work of Nanthur road is in progress, Mangaluru South MLA J.R. Lobo along with Jacintha Alfred and MCC Commissioner Hephsiba Rani Korlapati visited and inspected the work on Friday March 20 to see the progress.

Upon seeing the progress Mr. Lobo asked the Engineer in charge to speed-up the work and complete the stretch in four weeks to allow the movement of vehicles. The Engineer assured the MLA to complete the work within the scheduled time.

Mr. Lobo getting into the details of the scope of work instructed the construction Engineer to set up a bus bay, construct proper footpath, dividers and to shift the pump house, which is located adjacent to the road.

Speaking to Udupitoday.com Mr. Lobo said that out of the four lanes, two lanes will be completed in a week and it will be kept for the curing process for three weeks. After four weeks the new road will be opened for the smooth flow of vehicles. Simultaneously the other two lane work will be carried out.

The MLA said that the concreting of the Bendur – Mallikatte (Kadri Temple Entrance) stretch will be started within a month. He also advised the engineers to make provision for the rain water drain and also the underground drainage system and cables. He said that the road work should be done without harming the existing trees