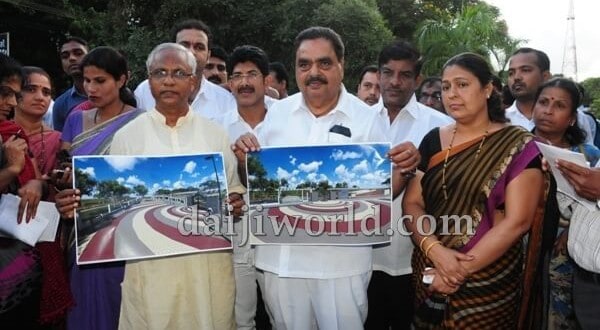 The entrance gate will come up at an estimated cost of Rs 29 lac from J R Lobo’s MLA fund.

Addressing District in-charge minister B Ramanath Rai, “The Kadri Park is the city’s centre of attraction. A project has been initiated to give a facelift to the park. This is just the beginning, the park will undergo many more development works. The old Deer Park will become a musical fountain park soon. Rs 5 crore has already been sanctioned and the park will soon become much more enjoyable.”

Speaking on the occasion MLA J R Lobo said, “We have already prepared the blueprint for the musical fountain and tender process is under way. Today foundation stone was laid for the entrance gate of Kadri Park, and outside the park there will be many developemental works initiated so that people can spend their evenings in a better way. Many developmental works will be initiated inside the park under the CSR fund. The Kadri Park has to be the best park in the city and funds have already been released and works will commence from tomorrow (Tuesday September 15).

“The long-awaited children’s toy train work will commence soon. We have already released Rs 40 lac and we are awaiting another Rs 11 lac from the MCC. We are also waiting for work on the tracks to complete,” he added.