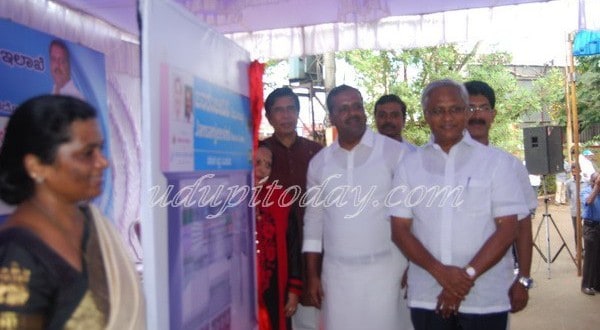 Image from Post Regarding Mangaluru: Foundation laid for Medical Center at Wenlock

Speaking on the occasion U T Khader said that, it is really good to be part of this inauguration. People come to Wenlock for treatment and it is really good that our doctors, nurses and all other staff respond to their needs. Wenlock has the best post-mortem facility in the whole state, he said.

Health minister said that, Generic medical stores will be introduced in all the districts in the next three months, where medicines will be available round-the-clock and sold at a concessional price. A diagnosis centre will be shortly opened and CT scan, MRI and other machines will be shortly installed here in Wenlock, he said.

UT Khader said that, Shraddhanjali vehicle is the first of its kind in the whole state. Shortly we will introduce accident care insurance. If someone meets with accident, the expenses for the first 48 hours will be borne by the government up to Rs 25,000. Karnataka is the first place to introduce this kind of scheme in the whole of Asia. Wenlock hospital will also get a facelift once internal infrastructure is complete, he said.

Addressing the gathering Oscar Fernandes said that, health is an important part of our lives. The human lifespan has increased to 65 years as a result of medical science. Generic medical store started by the government is a really good scheme as people will get medicines at a low price. When accident occurs and patient is taken to hospital, they first ask how much money you have, but the government by introducing insurance scheme has made a pathway for treatment for the first 48 hours and costs upto Rs 25,000 will be borne by the government. People come to Wenlock hospital not only from this district but from other districts too. he said.

J R Lobo in his speech appreciated the efforts put in by the heath minister. He said that, the health minister has taken great interest in Wenlock and Lady Goschen hospitals since ever since he took charge as health minister. If we compare these hospitals to how they were two years ago, we can see how much they have developed now, he said.

The MLA said that, a hospital cannot be a good one with infrastructure alone. It also needs good service from doctors, nurses and all other employees and that service has been continuesly provided by the entire staff of this hospital. The health minister has given all support and we have to appreciate him for that. I wish good health to our health minister and may god give him strength to continue his good work, he said.