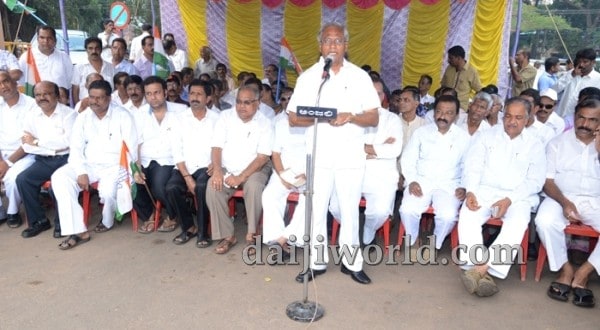 Mangaluru, Mar 11: The district unit of the Congress party on Wednesday March 11 staged a protest against the BJP-led union government over the Land Acquisition Bill and termed the government as ‘pro-corporate’ and ‘anti-farmer’.

Addressing the protest that was held in front of the DC’s office here, district incharge minister B Ramanath Rai said, “The Land Acquisition Ordinance passed by the BJP government is anti-farmer and pro-corporates and pro-industty. This Bill is against the interests of farmers, as land can be grabbed without their consent.

“Congress never did injustice to people, instead it always protected the interests of farmers.
When Congress brought the Land Reforms Act for the betterment of people, the Jan Sangh opposed it. Every reformative programme that the previous Congress government brought into effect aimed at the welfare of people. BJP has misled the people with lies,” he said.

MLA J R Lobo in his address said, “The Land Acquisition Bill is a draconian law which is against the interest of farmers. Earlier the British had introduced this type of land bill. This bill will facilitate the corporates and not the farmers. Government should seek permission from the farmers while acquiring their land, give them market value and also make arrangements of settlements and provide better compensation. The BJP government should immediately withdraw the Land Acquisition Bill.”

MLC Ivan D’Souza said, “Modi government which came to power through social media campaigns had promised to provide people-friendly administration, but now it has passed the Land Acquisition Bill which is anti-farmer and pro-corporate. The government should seek permission from farmers before acquiring their land. But in this bill the government can grab the land in the name of development without the land owners’ permission. This move of the government will facilitate real estate businesses.”