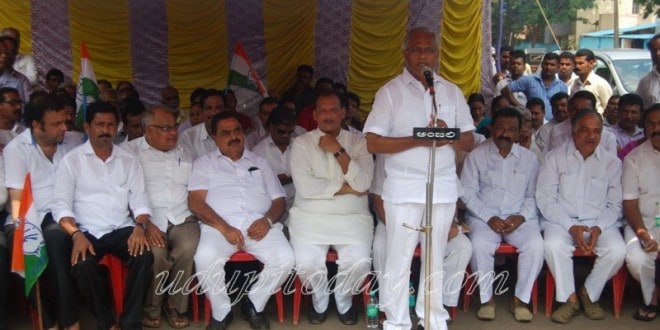 Image from Post Regarding Congress protests against Land Acquisition bill

Mangaluru, 12 March 2015: The D.K. district Congress Committee on Wednesday staged a protest in front of DC’s office against the BJP-led union government over the Land Acquisition Bill and termed the government as ‘pro-corporate’ and ‘anti-farmer’.

Addressing the protesters, MLC Ivan D’Souza said the amendments were against the interests of farmers. The previous UPA government had brought in the Act to acquire land with the consent of farmers and pay them fair compensation.

However, the BJP government had brought in amendments to the provisions through an ordinance, without allowing any debate in Parliament. “The government should have discussed the amendment in the Lok Sabha,” he said.

“Farmers across the country should raise their voice against the amendments.” By amending the Act, the government had sent out a message that “it is a government for the corporates and industrialists. The amendment should be withdrawn,” he said.

“The Centre has forcibly brought the ordinance on land acquisition act. The Congress will fight against the injustice,” he said.

Mangalore South MLA J R Lobo said the BJP government’s decision to amend the provisions of Land Acquisition Act through an ordinance will lead to forcible land acquisition and diversion of land acquired.