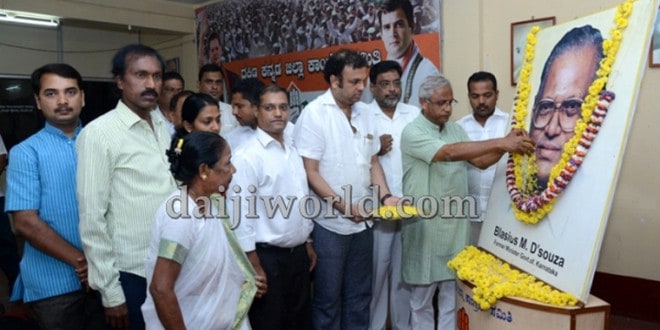 Mangaluru: Balmatta-Bendoorwell road to be named after Blasius D’Souza

Mangaluru, Mar 9: “The road from Balmatta Canara Bank circle to Karavali circle in Bendoorwell will be named ‘Blasius M D’Souza Road’. The official announcement will be made soon,” said MLA J R Lobo on Monday March 9 in the city.

Addressing a press meet at the district Congress office here, J R Lobo said, “For so many years we have tried to achieved this, but due to several reasons the naming was delayed. Now, thanks to the efforts of many people, the state government under the leadership of chief minister Siddaramaiah has made it a reality. I want to thank the DC, the MCC, the police commissioner and the Congress party for their unconditional support.”

He further said, “Blasius M D’Souza served as the district president of Congress committee in Dakshina Kannada for several years. He was Mangaluru city council member and later became council president. He was the state legislative council member and also served as labour and law minister. Blasius loved wildlife very much. He was the founder and patron of Mangaluru Wildlife Trust. He was the member of governing council of Father Muller Charitable Institution.

“He was one of the most successful men born in Mangaluru. Taking note of his work and dedication to society, the state government has decided to honour him by naming the road from Balmatta Canara Bank circle to Karavali circle at Bendoorwell after him. This is a moment of moment for all of us,” Lobo said.

Prior to the press meet, J R Lobo along with other leaders of Congress party paid homage to Blasius D’Souza who passed away in 2008.