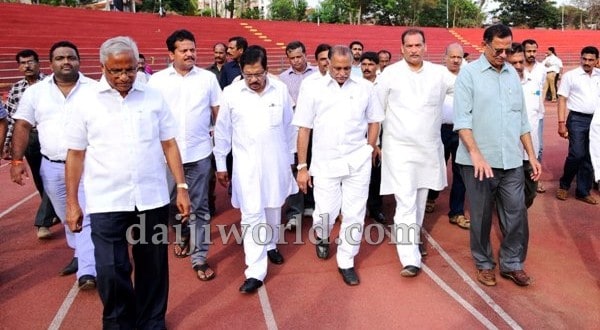 Mangaluru, Apr 11: President of Karnataka Pradesh Congress Committee (KPCC) on Saturday April 11 inspected Mangala Stadium in view of the upcoming national-level Athletics Federation Cup-2015 that is scheduled to be held here from May 1 to 4.

Speaking to reporters, he said, “The Federation Cup will be inaugurated by the chief minister on April 30, and on the first day there will be only the formal function and cultural events. Sports events will be held from the next day.
“As many as 700 athletes have already applied for participation and 200 officials from all over the country will attend the event. Temporary floodlights will be installed as the events will go up till night,” he added.

“Arrangements for the event, accomodation and other things are being taken care of committees formed under the leadership of ministers. The district administration has taken special interest in this event. For the first time we have given the district the responsibility to hold such an event and we are confident of its success,” he further said.
He also requested sponsors to come forward and contribute generously, adding that the state government and the CM are giving all support to the event.

Earlier in the evening, a meeting was held at the DC’s office regarding preparations for Athletics Federation Cup-2015.

During the meeting, decisions were taken related food committee, stage settings, lighting, accomodation and other arrangements.

ports minister Abhaychandra Jain said that Bollywood star Suniel Shetty would be attending the inaugural ceremony on April 30, while CM Siddaramaiah would be flagging off the event.

He also said that the Karavali ground where the sports meet will be held has been upgraded to accomodate 200 metre track for practice. DC A B Ibrahim said that track for jogging for the public will also be laid.
Jain further said that nearly Rs 2 crore is being spent on the event. “We have asked for Rs 1.7 crore from the government and Rs 20 lac from MCC. This will include Rs 50 lac for equipment and materials and Rs 20 lac to meet other costs like accomodation, food etc.”

“This event is being held here so as to bring more attention to Mangaluru and particularly Mangala Stadium,” he added.

Officials informed that the venue will have a medical room, rest area for athletes, cabin for press persons and photographers, and an equipment store.