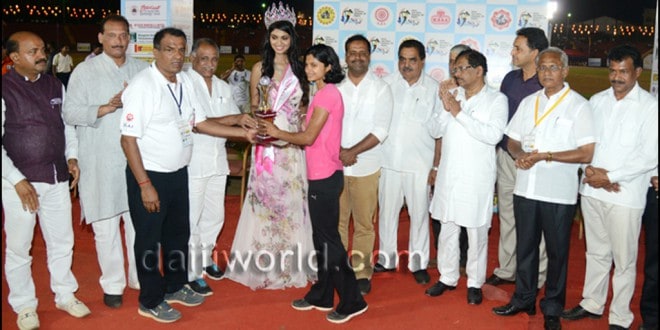 Mangaluru, May 4: The fourth and final day of the 19th Federation Cup Senior Athletics Championship brought disappointment to Karnataka, as it lost the championship to others after maintaining a good lead for the past two days.

The overall championship was bagged by the Army team with 123 points, followed by Tamil Nadu (114 points).

The men’s championship also went to Army, again with 123.5 points, followed by Tamil Nadu with 48 points.

In the women’s category, the championship was won by Kerala with 86 points. Karnataka came second with 68 points.

Among the men, Inderjeet Singh of Haryana, who won the gold in shot put, won the best athlete title, while Srabani Nanda of Odisha who won the 100 m dash was adjudged the best woman athlete.

A happy news was that local favourite, Poovamma, who has won laurels internationally, clinched the gold in 400 m run and qualified for the Asian Athletics Championship to be held in China.

Speaking to daijiworld, Poovamma said, “This is my first athletics meet this year. I am happy with my timing. I was under too much pressure as the local crowd had come to see me, expecting me to perform well, and also because my competitor Tintu Luka was in the race. But I was confident as I have beaten her before also. I am happy to have won the gold in front of the Mangaluru crowd.” Though Poovamma hails from Kodagu and represented the ONGC team in the event, her family stays in Mangaluru and she enjoys local support.

Karnataka also won the gold in women’s 4×100 m relay. Mangalurean Varsha R, who was among the team, said that she was happy to win in her hometown but sad that her team did not qualify for the Asian Athletics. “We wanted to beat the meet record but we timed 47.20. The weather suddenly changed which worked in our favour and helped us perform better,” she said.

The closing ceremony was held the same evening, in which Aafreen Vaz was the chief guest.