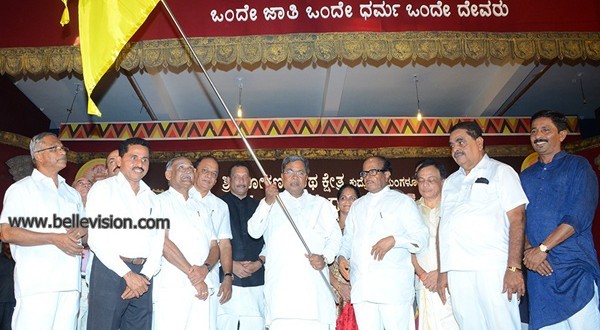 Image from Post Regarding Mangalore: Society should be united in name of Religion – CM Siddaramaiah

Mangalore: Society should be united in name of Religion – CM Siddaramaiah

Mangalore, 28 Sep 2014: The Chief Minister of Karnataka Siddharamaiah said that some people have been using religion and god to divide the society. During this Dasara, Let the god enlighten their minds.

He said, ‘There is only one God. And there is only one religion for God. Hence being the children of him we should live in peace and harmony. It is inhuman thing that some people are not allowed to enter the temple of God and worship him. In this context Swami Narayana Guru Stands tall, who built temples for the downtrodden when he was not allowed to enter one,’ said CM Siddaramaih.

‘We should pray for others when we pray to God. I have prayed for the prosperity in the state. Let us not be selfish in front of the God rather pray for each other,’ said CM Siddaramaih.

Replying to former union minister Janardhan Poojary’s suggestion that CM Siddaramaiah said that in the temples those are taken care by the state, female priests will be introduced on pilot basis.

Earlier, Janardhan Poojary who presided the function suggested to CM Siddaramiah that as it was introduced in the Kudroli temple, CM also should exhibit the respect that he has for women by appointing female priests in the state-owned temples.

The temple development Committee presented the idol of Lord Krishna on the same occasion.