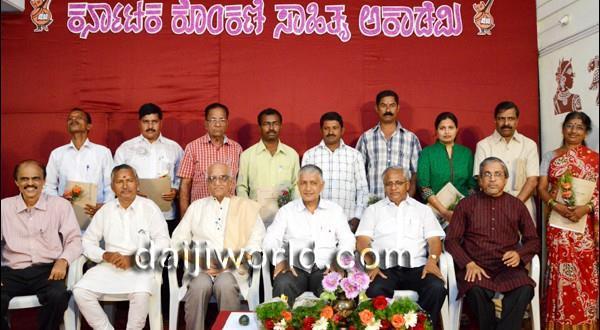 The ceremony began with a prayer song, led by Ivan Mascarenhas, teacher at Lourdes Central School. Dr B Devadas Pai, registrar of Karnataka Konkani Sahitya Academy welcomed the guests and a floral welcome was extended to all the dignitaries.

Roy Castelino signed the documents and accepted the charge of the Academy and greeted the other 10 members who were appointed by the government together with him.

Roy Castelino in his presidential address thanked the people for their love and support towards him, and said, “When I see all the people gathered here, I feel the confidence to take further steps without any problem. My one and only intention is that Konkani language should be promoted so as to reach everyone.”

He added, “The government has done a very good job by appointing 10 members along with me to work for Konkani.”

J R Lobo, MLA, Mangalore South, said he is sure that Roy Castelino would take Konkani to greater heights.

“Being in a big position means more weight on your shoulders. When you have power, you will have to face many problems, but you should never step back. I know Roy Castelino will never step back. Before taking any decision you must think twice. Children should start learning and writing Konkani language. That is how we can save Konkani. Kodavas and Malayalis never keep their languages in a corner. They are proud of their languages. Likewise, we too should never neglect Konkani language,” he urged.

Eric Ozario, general secretary, Jagotik Konknni Songhotton (JKS) said, “Responsibility is more important than power. The government has elected 10 members along with Roy, which is a good thing.”

Eric also requested the Academy to print letters in Konkani instead of in other languages.

Kundapur Narayana Kharvi, former president of Karnataka Konkani Sahitya Academy, said, “Today is a great day for us. Roy Castelino has always supported Konkani related programmes, cultural events and so on. People talk a lot about Konkani, but only 1% of them actually work for the betterment of Konkani.”

Kasargod Chinna, former president of Karnataka Konkani Sahitya Academy conveyed his best wishes to Roy Castelino and mentioned that Roy is the right person for the president’s post.

Vitori Karkol compered the ceremony and proposed the vote of thanks.