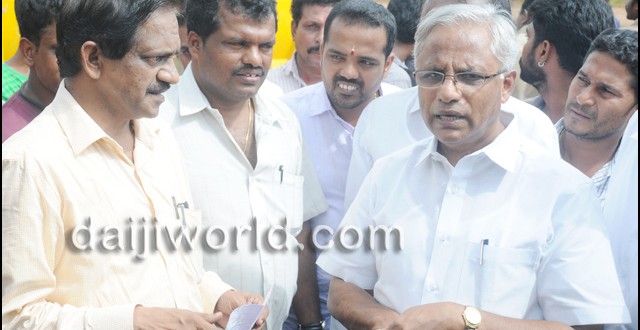 Mangalore, Aug 9 : A team comprising assistant commissioner, Dr Ashok, and tahsildar of the taluk, Mohan Rao, conducted raid at the sand mining area at Adam Kudru on the banks of River Netravati near Ullal on Saturday August 9 morning, and seized stock of sand found there and also eight trucks and bulldozer. All the seized vehicles were then handed over to Ullal police.
The team noted that bull dozers had been used for loading sand into the trucks, although their use has been banned. However, the sand miners argued that they had not used JCBs for sand mining, but they were put to use only for loading sand into the trucks, which is allowed as per rules. Out of the nine trucks on the spot, the officials found that only one had valid licence, while the others were unlicenced.

The sand miners also said that the work of sand mining had begun only today after a long gap because of heavy rains. The locals also opposed seizure of bull dozers along with trucks. Rajesh Ferrao, who holds licence for sand mining, said that the officials were not right in including bulldozers along with trucks while seizing. Pointing out that the officials have accused the sand miners of using bulldozers for sand mining, he said these machines cannot be used for sand mining, as river is very deep at this point. He claimed that these machines were used for only loading the sand brought ashore by boats.
While the tahsildar insisted that sand was also mined by some without licences, several said they had applied for licence long back, and were yet to get the same.

MLA, J R Lobo, who had arrived at Adam Kudru to take part in pipeline inaugural function there, visited the spot, and lent an ear to the problems of locals. He advised the officials to levy penalty to erring trucks on the spot wherever they were found to be functioning without licences.
Ullal station house officer, Ramesh Hanapura, and other police personnel were present.