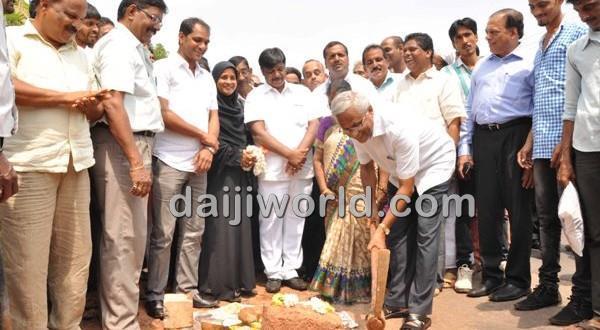 Mangalore, May 24: PWD minister Dr H C Mahadevappa on Saturday May 24 laid the foundation stone at Thokkottu junction for the widening of two-lane road from Ullal to Mani (Bantwal).

The route has been witness to unprecedented traffic blocks as there are many educational institutions and hospitals in addition to IT park along this stretch.

He further said, the road would be extended up to one metre on each side and tarred. Subsequently, it will be converted into a four lane road. At present, there are seven bus stops between Ullal and Mani which will be renovated. Kuthar, Natekal and Asaigoli junctions too will be developed, he said.

Earlier, the minister examined the development work which is being carried out on Ullal-Masthikatte road. The work is being undertaken at a cost of Rs 2.50 crore. According to the proposed plan, a stretch of 400 metres will be concreted and another 500-metre stretch will be tarred.

Health minister and MLA of the constituency U T Khadar, MLA J R Lobo, deputy commissioner A B Ibrahim, local leaders were among others present on the occasion.