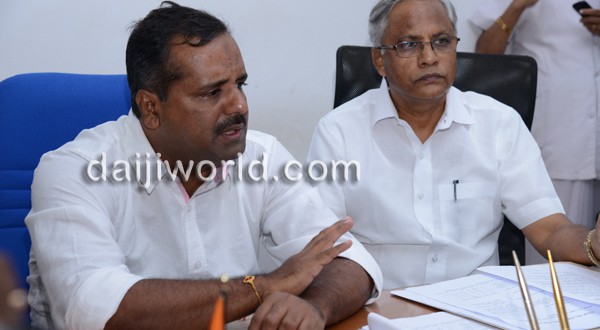 Image from Post Regarding Passengers at airport to be screened for Ebola virus: Khadar

Mangalore: Passengers at airport to be screened for Ebola virus: Khadar

Mangalore, Aug 8: To prevent the spreading of the dreaded Ebola virus that has created havoc in African countries, passengers will be screened at Mangalore and Bangalore airports from Saturday August 8, said health minister U T Khadar.

Addressing a press meet here on Friday August 8 along with MLA J R Lobo after inspecting Wenlock hospital, Khadar said, “Though we have no threat of the virus spreading from Africa, we will start screening passengers at Mangalore and Bangalore international airports from tomorrow (Saturday).

“We will take care of the safety of doctors who will screen the passengers. I will also write to the health minister of Kerala to do screen passengers in the airports in that state, and also to Delhi and Mumbai,” he added.

He also urged people who are travelling to African countries to cancel or postpone their plans till the threat subsides.

Regarding the ongoing work on the mortuary at Wenlock, he said, “We will have a sophisticated mortuary which will be a model to the state. There will be facilities like bathrooms, seating arrangements and drinking water for families who visit the mortuary.

“Almost 99 percent of work on the sewage treatment plant at the hospital is over. The water will be used for garden and toilets,” he added.

He also said that process is on for setting up directly observed treatment (DOT) centres for TB patients.

On the proposal to start a government medical college in the city, Khader said the process is on and talks have been held with KMC, but there is problem of land availability. “As per MCI norms, 20 acres of land are required to set up a medical college, but as of now we have only 15.5 acres. We are planning to hold discussions with MCI to relax this rule,” he said.

Khadar also expressed concerns over increasing number of communicable diseases and said that it was mainly due to stagnant water and solid waste. “Also, lots of people from other places come to Mangalore and Udupi, which contributes to the spread of diseases. We are putting in our best efforts to tackle the diseases. I will also write to the lake development authority to cleans the water bodies in the state, including Gujjarkere lake in Mangalore,” he said.

He also informed that the support allowance for ASHA workers has been increased to Rs 2,200, and that government workers and their families will be given health insurance under Arogya Sanjivani scheme.

Earlier in the press meet, J R Lobo suggested that a trauma centre has to be set up in Mangalore as it would help patients who come from distant places. Khadar said that a second level trauma centre would be ideal for Uppinangady or Sakleshpur, where, when accidents occur, the injured have to be taken to either Hassan or Mangalore for treatment. If a trauma centre is set up in Uppinangady or Sakleshpur, it would benefit accident victims, Khadar said, adding that discussions in this regard are already on.

Lobo also said that Wenlock hospital should be declared as a regional trauma centre, to which Khadar replied that Wenlock comes under Mysore division and the proposal would be discussed with chief minister Siddaramaiah who also hails from Mysore.

Prior to his visit to Wenlock, J R Lobo visited KMC hospital to check on the two-year-old boy who was injured after being mauled by stray dogs in Kudroli on Thursday August 7.