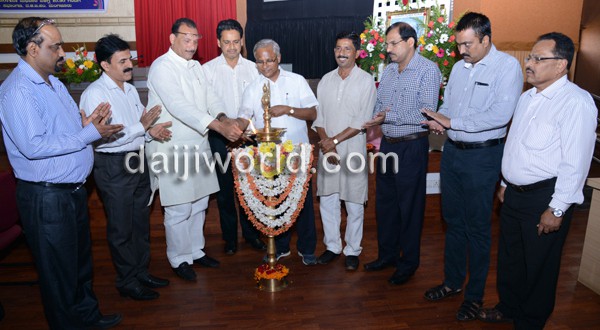 After inaugurating the event, MLC Ivan D’Souza said, “Devaraj Urs was a great personality and a politician who provided efficient administration for the empowerment of backward classes to bring about social equality. His thoughts emphasized the need to make every last person in society self-reliant. He also gave priority to implementing the Land Reforms Act. The Congress emphasized his policies in their manifesto.”

On this occasion, students who secured the highest marks in metric, post-metric examinations, post graduation and winners of an essay competition were felicitated.

In his address, A B Ibrahim, Deputy Commissioner said, “Though Urs was aware of history and knew of the various ‘isms’ like colonialism, capitalism and socialism, he did not accept any of these. He implemented various reforms which were essential for the state. His programmes were successfully implemented in the coastal district. His administration, education policies and reservation in politics gave rise to new leaders in politics from various places. But we still failed to implement his thoughts. His prioritization of the Land Reforms Act proved useful to the people.”

State minister for health and family welfare U T Khader said, “The contribution of Devaraj Urs to politics made various leaders emerge from various places. He emphasized bringing all suppressed classed into the mainstream of society. During his administration, Urs brought about various social changes. For the purpose of social equality, he brought in reservation. He took the bold decision of implementing the Land Reform Act policy of Indira Gandhi in the state which made tremendous changes in society. He strived for social harmony.”

Mayor Mahabala Marla after garlanding the photo of Urs, said, “Urs gave good, efficient administration during those days. Good administration can be given if the executive, legislative and judiciary work properly. Everyone should imbibe the thoughts of Devaraj Urs. His thoughts emphasized on providing social justice in society.”

MLA J R Lobo presided over the occasion. Nagappa, associate professor, Department of Kannada, University College, Mangalore, briefed about the contribution of D Devaraj Urs as a politician, his good administration and how he strived to bring social equality in society.