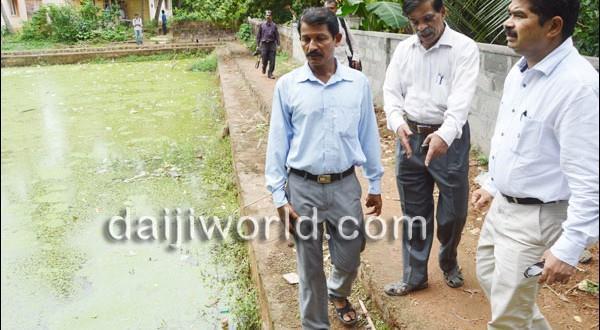 Mangalore: May 7: Dead fish found floating in Karmbikere pond located at Jeppina Mogaru (Ward 54) on Tuesday, May 6 caused much alarm and health concerns in the vicinity that is said to be a prone to malaria and dengue.

The drain water channelized to the pond through pipes was a key reason for the contamination of the fresh water which is home to many aquatic bodies.

The mass death of fish continued on Wednesday May 7 too, even as the drain water flowing down the pond contaminated the water body and adversely affected the eco system.

The corporation on demands of the residents, spared as many as Rs 25 lac recently to rejuvenate the pond. However, it is alleged that internal rift between MLA of Mangalore south J R Lobo and Mangalore City Corporation commissioner Ajith Kumar Hegde resulted in the officials neglecting the pond.

“At the fag end of the rejuvenation process of the pond, the corporation intentionally channelized the flow of drain water to the pond,” alleged Chittaranjan, a resident living near the pond that is emanating a unbearable stink these days.

“The pond has its own history. It was the duty of the MCC to preserve the pond. We had advised the MCC to reopen a water stream connecting to river Netravati that has been closed by the goons of land mafia. MCC refrained from opening up the stream to let out the waste water and even drew pipelines to the pond,” he alleged.

A complaint in this effect was filed with MCC commissioner on March 7, but no affirmative action was taken by the corporation. The nearby wells were also contaminated due to the impact of the drain water accumulating in the pond. The water now has begun to stink causing serious concerns of an outbreak of malaria and dengue. “There was some internal rift between Lobo and the commissioner that has hindered the MCC from acting upon repeated pleas of the locals,” Chittaranjan added.

“Since yesterday the pond has started to emanate a stench and it is affecting our kids and the surroundings. Over the past three years we have been facing the same problem but this year it has crossed all limits. Silver fish, Mugudu and various other thousands of fishes are floating dead in the pond and waste like bottles, plastics, soap water, toilet cleaning chemicals are all mixed in this pond water.” said Shakunthala Poojari, a resident near the pond.

She also expressed fears that it would be worse once the rains start. “Now itself mosquitoes are increasing everywhere. We cannot come out of the house and sit outside in the evenings as before,” she lamented.

Shakunthala has two small kids and she is worried that they might fall sick.

The water which enters the pond is from the houses located in the high-lying areas. The pond has one exit and that is reserved for letting out excess water during the rainy season.

“Since three years, whenever the water level increases, our yard gets flooded with water and mosquitoes start to breed. Even mosquito coils and repellents do not work. There is a small way for the water to exit and there is no bridge for us to cross, we have to hop over the water. If we lose our balance we will fall into this pond,” said Devaki Poojari (65).

MLA J R Lobo speaking to daijiworld, said that the commissioner might have been sitting on the issue. “He could have passed stringent orders to his officials to sort out the problem, a day after it was brought to his notice. I will visit the place after I return from Shimoga from my official tour,” he said.

The corporator of the ward Surendra blamed the MCC for putting the demands on hold intentionally. He said, “A team of locals met the commissioner, but his actions suggested his reluctance to address the problem.”

“Rs 25 lac was sanctioned in 2011-12 when Yogish Bhat was the MLA and this year the MCC officials had visited the spot three times but never took any initiative to clean up the pond,” said Surendra.

“The pond is two-and-a-half meter deep and earlier people used to take water from this pond for their gardens. Now cats are searching for their food and looking for the live fish to eat while mongooses are eating the dead fishes floating on top,” he added.

On Wednesday, the commissioner himself visited the spot and expressed shock at the sight of dead fish. He inspected the pond and told the media that first the entrance of the waste water will be blocked and then the pond water will be emptied, and further steps will be taken very soon. He directed offcial Ravi Shankar to take this issue very seriously and initiate corrective measures immediately.