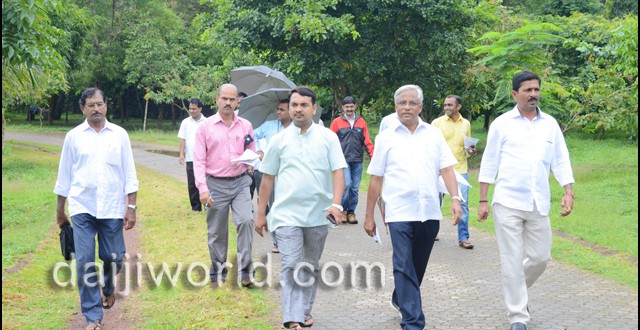 Image from Post Regarding Daijiworld impact - J R Lobo inspects Kadri Park, promises to set it right in a week

Mangalore, Aug 28: Taking serious note of the report on daijiworld regarding the pathetic condition of city’s Kadri Park, MLA J R Lobo along with the mayor, MCC officials and officers of the horticulture department inspected the park on Thursday August 28 and assured of cleaning up the park within a week.

Daijiworld on August 25 had carried a report on Kadri Park turning into hotbed of undesirable and illegal activities. The report highlighted the poor maintainence of cleanliness in the premises and how the park had become a meeting place for thieves.

Armed with copies of the report and photographs published in daijiworld, J R Lobo and the mayor with their team of officials inspected the park and discussed measures to rejenuvate and maintain it.

Speaking to reporters later, Lobo said, “Earlier there was water problem in the park, but now there is no such problem. The main problem is in maintaining the park. From the last two months, the maintenance was very unsatisfactory.”

He further said the state government has been asked to sanction Rs one crore for the development of the park, and this year Rs 5 lac was released for its maintenance. “We will talk to the DC and within a week the park will be cleaned and set right,” he assured.

Stating that the park was for all, including young couples, he said, “Many youngsters come to the park, they also need space, and so too senior citizens. This is a place for everyone. Adequate security has been deployed and police personnel have been coming to the park especially at night.”

On the defunct toy train, he said he would talk to the DC within a week and arrive at a suitable decision.

“There is electricity in the park and additional lights have been installed, but some miscreants have been stealing bulbs and wires. It is responsibility of the people also to take care of the park,” he said.

He added that though the park is facing problems, its condition is better than earlier.

About his earlier promise made in 2013 to rejuvenate the park within 15 months, Lobo said the development work is going on steadily but due to rains the work got delayed.

Mayor Mahabala Maarla said that the toy train was operating from 1996 to 2007, but he did not know what happened thereafter, as the file had gone ‘missing’ from the MCC. To this, the other officials said that the responsibility of the toy train had been handed over to Bal Bhavan.

“We will guide the officials in maintaining the park. We have also asked the police to inspect the park regularly so as to prevent illegal activities here,” he said.