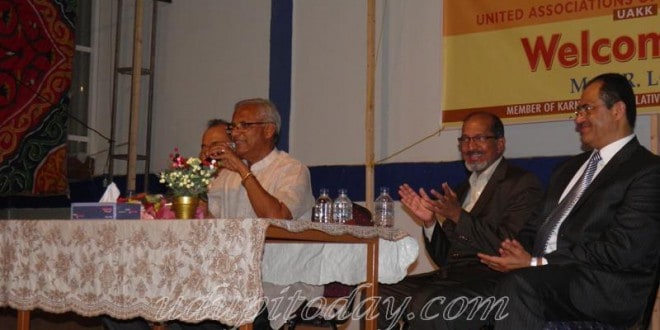 Speaking on the occasion, Mr. J.R. Lobo assured to the audience and leaders of UAKK member associations that he would be their voice and convey their concerns of passengers to Aviation Ministry and Air India Express Management regarding flight timings, hike in fare, luggage, hygiene in the aircraft, improvement in catering facilities and the hospitality of AIE staff etc.

He also assured that he will suggest Karnataka State Government to grant permission to NRI students to appear for CET examination once they complete 12th standard in Kuwait or in other GCC countries so that the fees structures for NRI students will match with local students.

Mr. Fayaz Sheikh coordinated and convened the public meeting and Mr. Stephen Machado conveyed the vote of thanks.