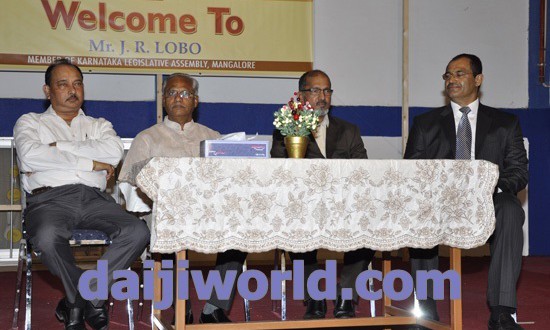 Kuwait,Oct 31: During Mangalore MLA J R Lobo’s current visit to Kuwait, United Associations of Karnataka (UAKK) arranged a public meeting to discuss AIR INDIA EXPESS flight services to Kuwait-Mangalore sector on Thursday 30 October 2014 at SIMS Auditorium, Salmiya, Kuwait.Karnataka Legislative Assembly Member J.R. Lobo was the chief guest.
Lobo had travelled in the AI Express flight- the first flight of the season taking off from Mangalore International Airport on Monday October 27 at 7.30 am. Presidents and office bearers of various Karnataka state associations in Kuwait and large number of coastal Karnataka NRIs in Kuwait were present during the occasion.

The meeting started with formal welcome by compere of the evening, well known Social activist Fayaz Sheikh. Both J.R. Lobo and his wife were honored with flower bouquet.

Lobo shared his experiences about support of Karnataka minister Roshan Baig, his recent meetings with State Aviation Minister G.M. Siddeshwar, Air India Express COO Vaz, MD & CEO Rohit Nandan who approved the restoration of AIE express services to this sector. He explained the importance of making this sector profitable in order to attract other airlines.

In the open question and answer session, the several audience from coastal Karnataka and Northern parts of Kerala suggested several points to increase the passenger load to Kuwait – Mangalore sector, and also conveyed their concerns they are facing while choosing AIE flights for their travel between Kuwait and Mangalore.

Some of the points suggested during the discussion to attract the passengers were as follow:
• AIE should respect the self respect of passengers whether they are from lower, middle or high class. Every passenger pays for their travel equally irrespective of their position or standard in society. AIE ground staff are sometimes very rude with passengers.
• AIE must introduce First class section like in other budget airlines in Gulf which will attract some people who can afford and want to travel first class.
• Even though AIE is paying a huge amount to the vendor, the food quality supplied is very poor. It was suggested either to improve the quality or stop the service which will increase the profits.
• AIE needs to wait at least till March- April to get full load as it started during off season and most of the tickets for December- January are already booked in other airlines well in advance.
• It is well known that AIE from Kuwait can take only 70% of its load as it carries fuel to its maximum capacity.
• The seats in KSRTC luxury buses are far better than AIE which needs to be improved as it causes inconvenience for long journey.
• It will get more load if they schedule flights on Thursday evening instead of Friday as travelers will get one extra day to stay in India as Friday is a weekly off in Kuwait.
• To manage with shortage of flights and to get full load, the schedule can be reduced to two days in a week instead of 3 days.
• The lesser load is only because of attitude and poor service of AIE which needs to be improved.
• Many passengers experienced that sometimes during booking, the flight is said to be full and while travelling it is half empty. A thorough investigation is required to find whether it is a system error, software problem or someone is playing to prove that this sector runs under loss.
• A huge fluctuation of prices is one of the reasons not to opt for the flight. Sometimes it goes very high a week before travelling date and suddenly it goes less, a day before teh travel. Even though AIE claims it as budget airlines, sometimes fare exceeds the luxury airlines which needs to be monitored and controlled.
• Other factor is 20 KG luggage allowance against 40 KG offer from other airlines. A real Marketing trick is to add 3 KD in the ticket itself instead of adding it for additional optional 10 KG luggage. AIE needs to change their marketing team to an efficient one.

J.R. Lobo assured that he will be their voice and convey their concerns of passengers to Aviation Ministry and Air India Express Management.
Lobo also said that he will suggest Karnataka State Government to grant permission to NRI students to appear for CET examination once they complete 12th standard in Gulf countries so that the fees structures for NRI students will match with local students.
KCWA Ex President Stephen Machado proposed the vote of thanks. The program was well moderated and compered by Fayaz Sheikh.
Some people who attended the meeting opined that the meeting would have been more effective and successful if any of the Air India Express representative were present to listen and answer the audience.