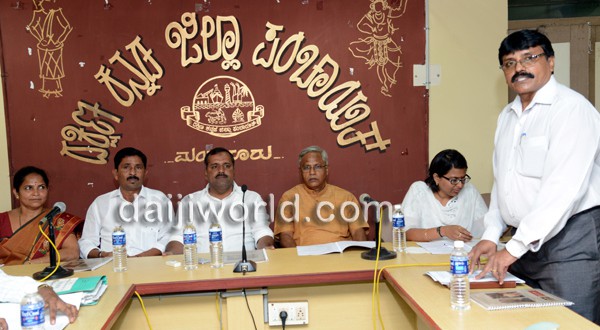 Image from Post Regarding Health booths to open in city; aim to make Mangalore healthiest in India, says Khadar

Mangalore, Sep 15: “On October 25, the District Health and Family Welfare Society will launch the ‘National Urban Health Campaign’. I want to make Mangalore city the healthiest city in India, along with Ullal constituency, Bagalkot, Bangalore and Mysore cities,” said minister for health and family welfare U T Khadar.

Addressing the media at the zilla panchayat hall here on Monday September 15, Khadar said, “On October 25, ‘National Urban Health Campaign’ as well as health booths and mobile units will be launched. Five health booths will open in Mangalore and four in Ullal. These booths will mainly cater to the health needs of labourers. Health booths will be installed wherever there is a large demand. Jyothi Nagar, Pachanady, State Bank, and Bunder areas are the main targets for now.

“Auxiliary Nurse Midwife (ANM) will be present in these booths. Ten primary health centres (PHC) will be opened, among which some would be upgrades of exising PHCs. The new PHCs will open in Kunjathbail, Shakthinagar, Neereshwalya, Padil, Bejai and Yekkur. PHCs in Suratkal, Kulai, Bengre and Jeppu are upgraded. The local MLA or corporators will look after the PHCs, and one woman SC/ST representative and one representative from an NGO will work in each of the PHCs,” he explained.

To keep malaria at bay in Mangalore, U T Khadar mooted the idea of organizing a ‘Health Day’ each week. “Day by day malaria is becoming a threat to everyone. On Health Day everyone should clear the stock water which has been stangnant for more than a week. Everyone’s participation is required. We will convene a meeting to discuss more about Health Day and spread awareness.”

Answering questions from the media, Khadar said that the National Urban Health Campaign is a five-year plan. “Next year our plan is to include 12 more cities and make them the healthiest cities. In the next five years we want to include all the cities.”

U T Khadar has received an invitation from World Health Organization (WHO) to deliver a talk on the ‘Implementation of medical schemes and problems’, in Cape Town, South Africa in a programme held from September 28 to October 2. WHO every year calls representatives from each country and this time, U T Khadar has been selected to represent India.