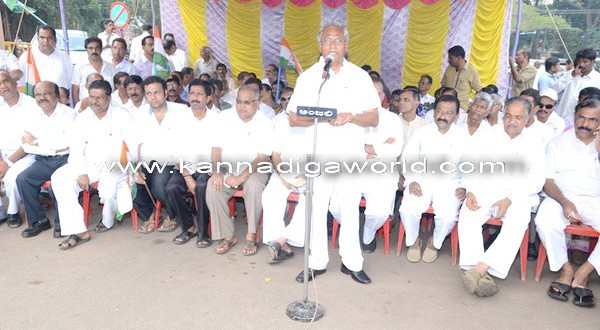 Image from Post Regarding District congress protests against the governments Land Bill amendment.

Mangaluru, March 11: The BJP government which has come to power after giving false assurances has done injustice to the farmers, said the district in-charge Minister Ramanath Rai slamming at the union government.The district congress had staged stir in front of the Deputy Commissioners office here on Wednesday opposing the amendments brought about on the Land Acquisition Bill.

Minister Ramanath Rai addressed the protesters and alleged that, the government has failed to protect the interests of the citizens by bringing about the amendments in the land ordinance.

The union government is supporting the corporate and has failed to protect the interests of the famers. The citizens of the country have to raise their voice against government, said Rai.

MLC Ivan D’Souza spoke on this occasion and said, the amendment brought about in Land Acquisition Act is anti-farmer and is pro-corporate. The farmers will be driven to the streets. The government after amending the land Acquisition Act without taking the consent of the farmers has made a way to the giant corporate to forcibly grab the fertile lands of the farmers, alleged Ivan.