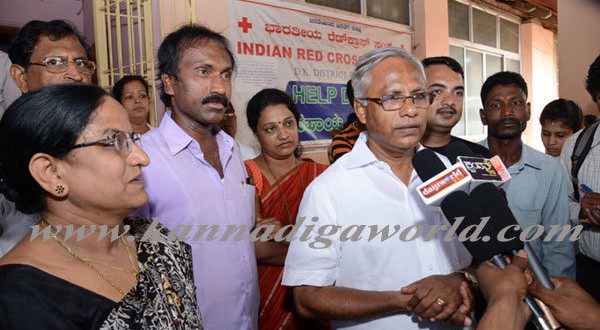 Mangalore, October 14: The Mangalore South MLA J R Lobo, visited the Lady Goschen Hospital here on Tuesday, October 14th and inspected the hospital facilities and the up-gradation work taking place in the hospital from 210-260 beds.
MLA said, upgrade of the hospital at a cost of Rs 21.7 crore is sponsored by the ONGC-MRPL and the project is expected to be complete by next 6-8 months, expressing great satisfaction over the functioning of the hospital, which has been providing health care facilities to people arriving outside the district too.
He revealed that, Centre For Excellence will be opened at the hospital to curb neonatal death and a blood unit component centre too will be set up here by former minister M Veerappa Moily shortly.
Dr Shakunthala, Medical Superintendent of the hospital said that the hospital conducts free deliveries to financially backward women. The infant mortality Rate is zero, while maternity mortality Rate is five per thousand mothers.
Lobo on realizing the shortage of Group D workers said, the issue will be discussed with the state government and will be resolved sooner.
The management was happy with the governmental aid. The officials informed Lobo that water supply was a point of concern to which Lobo responded that the issue will be rectified immediately with the aid of the Mangalore City Corporation.