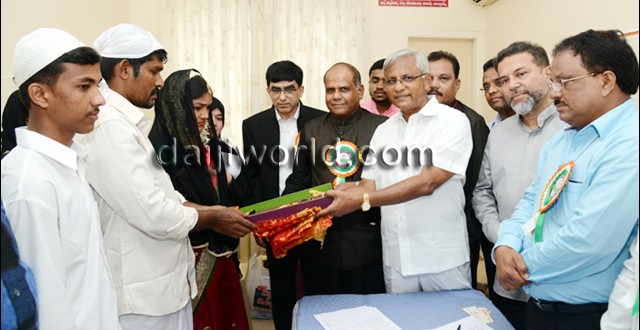 The forum had arranged weddings for 65 couples, economically-backward members of the Muslim community in the previous editions.

Mohammed Rafeek Krishnapura, Vice-president of Bearys Welfare Forum welcomed the guest and introduced them to the audience.

P M Ibrahim Musliyar Bekal, Qazi of Udupi district in his inaugural Address said, ” Islam does not believe in Dowry, but today it is a prevalent practice in the community. Those who marry must take a firm stand not to take dowry and curtail the practice. I wish the God’s blessings on the programme and on all couples who will be married today.”

Siddique Uchil, joint-secretary of Bearys Welfare Forum Abu Dhabi said, “Each couple were given gold, silver and clothes for the wedding. We have a budget of around Rs 1.80 lac per couple, The total expenditure is estimated to be around Rs 1.50 crore. The forum has also raised money to construct 100 toilets for economically-backward family’s over the past two years.”

B A Mohammed Ali compered the programme and Imran Ahmed Kudroli delivered the vote of thanks.